Why partner with us

The Forest Hill Football Club Inc. was established in 1967 and has been affiliated with the Eastern Football League since 1970.  Since our inception the Forest Hill Zebras have fielded hundreds of juniors teams and thousands of players as well as our very successful Auskick Program.  We are very proud of the fact that we also have two girls team.

2017 and 2018 have been exciting years for the Zebras, delivering a premiership, a runners up and several preliminary finals appearances.  Our coaches are in place with new recruits and a new Under 9s team is up and running

Forest Hill prides itself on being a family, community club; it has a welcoming atmosphere that promotes interaction between all.

We encourage all members of our community to support the Forest Hill Football Club Juniors in maintaining and improving its excellent results by signing up and becoming a sponsor in 2018.

All our partner packages can be tailored to suit individuals or businesses.  Speak to us about these options at a time that suits you.

We pride ourselves on being a club that all supporters, sponsors and players feel comfortable being a part of. 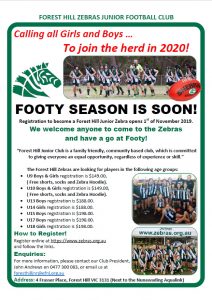